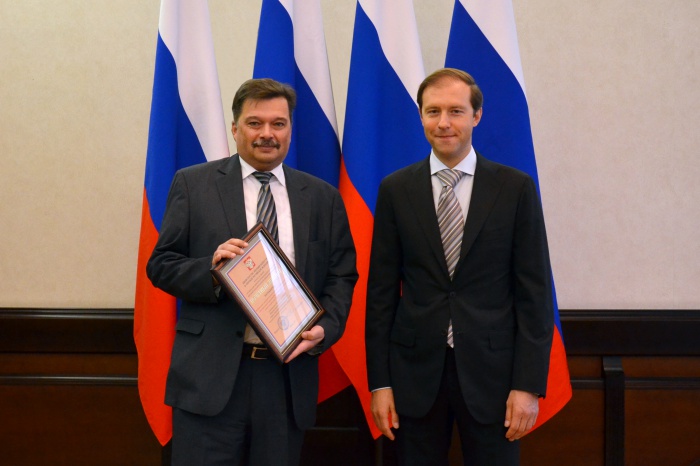 The award ceremony was opened by a welcome speech by the Minister of Industry and Trade of Russia Denis Manturov: “We award this prize for the first time,” he said. “And I think that the results will please us all, as the performance demonstrated by enterprises over the past year suggests that they are growing and operating not just at the expense of government support, but primarily due to development of a correct personnel management system.” Also Denis Manturov appreciated the positive changes on a wide range of social and economic development criteria. In particular, the Minister said: “Salary growth rate in the entire defense industry was 16 %, being twice the target value. Needless to say how this is important both to improve the living standards of workers, and to attract highly qualified professionals and youth to the industry.” Among other things, the head of the Ministry noted that “increase in labor productivity — about 20% — is ahead of wages dynamics. In many ways, it has become possible due to active work of the enterprises to improve quality of their human resources.”

Further, during the ceremony the head of the Ministry of Industry and Trade Denis Manturov presented an honorary diploma to Deputy General Director of FSUE TsAGI for Human Resources and Social Policy Ilyin Dmitry Yurievich.

"We are grateful to the Ministry of Industry and Trade of Russia for its appreciation of the socio -economic productivity of our institute,’ said Dmitry Ilyin in response. “It is a great honor for us and an important event, affirming the validity of the chosen strategy of the Russian aviation science center. This award was made possible due to the work of a large team.”

At the conclusion of the event Denis Mangurov invited the attendees to take part in the next competition, which will take place in 2014. In this regard, the head of the Ministry of Industry and Trade said that the next year businesses representing nuclear weapons and aerospace industries of the country will be invited as well. Thus, the number of potential participants will increase to 1,300 organizations that represent absolutely all the military-industrial complex of Russia.